Post DD Day 2013 and touring events in Jan 2013 we come with news of more happenings brought to you by the Delia Darlings in honour of the late great Delia Derbyshire.

and on BBC iplayer until April 2013

Delia Darling Caro C was invited to take part in a new series CBBC with Dick and Dom entitled Absolute Genius with Dick and Dom. This is a 10 part series looking at the likes of Archimedes, Newton and Da Vinci. And a programme looking at Delia Derbyshire, her work as an innovative electronic musician and of course her stunning work on realising the original Dr Who theme in 1963. 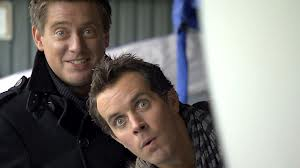 “We did a ridiculous remake of Delia’s amazing realisation of the original Dr Who theme tune using largely found (and yes) animal sounds.

Once we had gathered a load of pinging, bonging and wooshing bric-a-brac from charity shops, we set about creating the first 45 seconds of her iconic piece using just a laptop and a few software plug-ins.

Therefore, deliberately contrasting Delia’s intricate and time-consuming methods of working with our making electronic music with-a-few-clicks-of-a-mouse times. I also wanted kids to see how easy and accessible making music can be nowadays.”

The show was aired on CBBC on WED 20 FEB at 18:15 and will be available to view on BBC iplayer until beginning of April.

A free event as part of Manchester’s Radical Women programme for March 2013, Naomi Kashiwagi and Caro C will present Delia Darlings: Celebrating the Life and Work of Delia Derbyshire. For more information please proceed to our UPCOMING EVENTS page.