This is a no budget experiment to offer some hopefully interesting content expanding the understanding and appreciation of one of the key figures in the development of electronic music in the UK.

With our board of trustees, we have now set DD Day to be on or around the 23 November each year – whether online or in Manchester (where we and Delia’s archive are based) – followed by our touring events. It was 23 November 1963 that the Dr Who theme first beamed into British living rooms as the first episode was aired, 55 years ago today!

This smorgasbord of offerings includes two articles, a piece of binaural music, a documentary film, a short film with young people and a podcast of experimental music including a Delia Derbyshire Archive exclusive.

This is an expanded edition of an article first published in Issue 43 of Electronic Sound, devoted to the 60th anniversary of the Radiophonic Workshop. It is presented here in a revised form by kind permission of Electronic Sound.

Of all the remarkable individuals associated with the Radiophonic Workshop, nobody has quite captured the wider imagination and interest to the same degree as Delia Derbyshire. She was not there at the outset of the Workshop in 1958, joining the facility in 1962, and by 1973 she was gone – and yet Derbyshire continues to fascinate and inspire in ways that her other brilliant colleagues have not.

Her extraordinary life and work has been dramatised on radio, film and in at least two theatre pieces (Noctium Theatre’s Hymns for Robots being the most recent, performing across 2018), to say nothing of the numerous artists in various disciplines who have cited Derbyshire as a major influence on their own practice.

Much of that fascination is generated by the myths that have developed about Derbyshire, some of which were perpetuated, as her long-term partner Clive Blackburn has acknowledged, by Derbyshire herself. The standard narrative of Derbyshire’s life tends to move through a predictable sequence of beats, spliced together: her childhood in Coventry and the background sound of the Blitz, her realisation of Ron Grainer’s Doctor Who theme tune in 1963, her lack of official credits at the BBC, her freelance activity and encounters with famous figures such as Paul McCartney, Yoko Ono and Anthony Newley, her growing disillusionment at the BBC in the early 1970s followed by her departure in 1973 and then… seemingly nothing.

Binaural means employing two separate channels for recording or transmitting sound, thus creating an impression of depth and more closely matches what how the ear hears than a traditional stereo output. This is an expanding area of audio research, so we are very excited to present this work in this way. Can you tell the difference? (Best listened with headphones).

We asked Emma a few questions about her new work and her insight into Delia’s work.

How did you discover Delia Derbyshire?

I first indirectly came across the music of Delia Derbyshire when I was a child listening to the theme music for the original Doctor Who series, I of course didn’t know at this age that the music was produced by a female music composer, but years later it made this discovery even a little more exciting! In particular, as this was a programme I enjoyed watching so much as a child.

Over the past seven years, whilst studying electroacoustic composition, I have become increasingly interested in discovering the world of female electronic music composers e.g. Delia Derbyshire, Pauline Oliveros, Janet Beat, Daphne Oram and many more! This was partly due to the lack of women in the field of electroacoustic music, but more to discover who had innovatively helped shaped the sonic landscape of this field today.

How did you approach your piece “Dreaming Waves”?

This composition was heavily inspired by the work, Inventions for Radio: The Dreams by Delia Derbyshire and Barry Bermange, in particular the movements Falling and Sea, in which the album presents different sensations of dreaming. With this in mind, the piece explores the cyclic motion and sensations of dreaming with small pockets of memories and abstract sounds surfacing, creating an enveloping sound world. Dreaming Waves is created using electronically generated material, close-up microphone recordings of the voice and archival material.

The structure of this work is also inspired by a sketch from Delia’s notes, in which the visual score has helped emanate the use of space, frequency content within the work and larger gestural structures. 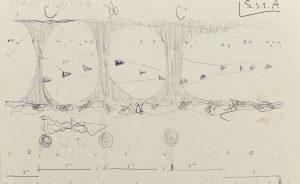 © The Delia Derbyshire Archive at The John Rylands Library, University of Manchester

CLICK HERE TO READ OUR FULL INTERVIEW WITH EMMA MARGETSON

In October 2018, we worked with Year 10 and 11 music students from Levenshulme High School for girls who learned about The BBC Radiophonic Worshop and their pioneering working methods. The students then produced new compositions using found sounds, looping and sampling.

Many thanks go to our education partner One Education Music and the passionate staff at Levenshulme High for helping make this project (and little film) happen.

ARTICLE: Delia Derbyshire: The Myths And The Legendary Tapes by Caroline Catz

All images from Delia Derbyshire: The Myths And The Legendary Tapes care of the author

Caroline Catz’s short film Delia Derbyshire: The Myths And The Legendary Tapes (2017) screened at this year’s BFI London Film Festival and is a playful, inventive and respectful portrait of Delia Derbyshire’s time at the BBC Radiophonic Workshop leading up to her decision to leave Maida Vale and relocate to northeast Cumbria in the mid-1970s where she worked at the LYC Museum and Gallery.

In this piece for Delia Derbyshire Day 2018, Caroline discusses her long-term interest in Delia Derbyshire and her approach to exploring Delia’s life and work in film, which will continue in an expanded feature-length project going into production in 2019. 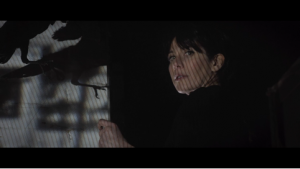 Way back in 2008 a friend and I were talking about Delia Derbyshire and her realisation of the Doctor Who theme tune, and how that piece of music had stayed with us throughout our lives and why so many people we knew shared a similar memory. As kids, how could we have all known to take refuge behind our sofas after only hearing the first few bars of the Doctor Who theme tune?

We decided there must have been a hidden frequency, something that tuned us all into a very primal sound, something terrifying that Delia must have experienced herself.

Delia talks about the sound of the air raid sirens during the Coventry blitz being her first experience of electronic music when she was really small and so began a conversation with my friend late into the night.

The conversation stayed with me and I became intrigued about Delia, her compositions and her process of working, her body of work at the BBC as well as her freelance work and then of course the puzzle of why she left the BBC so abruptly in 1973.

There’s a lot of speculation as to why Delia left the BBC. There’s a real gap there that inevitably gets filled with all kinds of theories and projected myths.

I’m intrigued by Delia’s life and work after the Radiophonic Workshop and fascinated about her choice to leave London and her move to Cumbria.

CLICK HERE TO READ OUR FULL PIECE BY CAROLINE CATZ

FILM: sharing a documentary from our friends at Deliaphonic in Coventry, UK

Sarah from Tin Arts and Music explains:
“Deliaphonic is an annual celebration of the life and works of Delia Derbyshire in Coventry, UK. Our mission is to programme events that highlight Delia’s legacy and showcase music influenced by her work. The project is programmed and managed by The Tin Music and Arts in partnership with Synthcurious.
Delia Derbyshire is known all around the world for her work on the Dr Who theme music and her influence on modern electronic music but not enough people in her home town of Coventry had heard about her. We wanted to celebrate her life and legacy and we did this by programming an event at Coventry Cathedral, on the 80th anniversary of her birthday, with performances from her contemporaries and those who were influenced by her music.
‘These Machines Have’t Finished‘ mixes footage from the day, interviews with performers intertwined with a short animated overview of her life (thanks to Karen Harte for these illustrations), starting in Coventry. The film was a way of both reaching people who didn’t come to the event and creating a legacy, something to remember the event.”
Film maker Ben Cook shares his intentions for this documentary:
“One of our intentions when making ‘These Machines Haven’t Finished’ was to tell the story of Deliaphonic, Delia and her influence, using what could be described as ‘filmic translations’ of her working style. We used stock footage in place of found sounds, then slowed down, sped up, reversed and repeated sounds and images to make the very nature of the film and it’s creation ‘Deliaesque.'”